Dennis Hopper was born in Dodge City, Kansas, on May 17, 1936. In 1954, Ruth Birch gave him a ten-line part in the television series Cavalcade of America. Soon after, Hopper was given a featured role as a boy with epilepsy in Boy in a Storm. After Boy in a Storm was aired on 1955, seven major studios contacted Hopper’s agent, Bob Raison, to negotiate contracts. They visited Warner Brothers to meet with Nicholas Ray, who was preparing to direct Rebel without a Cause. Hopper signed a standard seven-year contract with Warner Brothers, appearing in I Died a Thousand Times and then Rebel without a Cause, playing Goon, an adversary of James Dean’s character Jim. Dean became a mentor and close friend to Hopper during filming and encouraged Hopper’s new interest in photography and directing film.

Following Rebel without a Cause, both Dean and Hopper moved to Marfa, Texas, to shoot Giant, directed by George Stevens and based on the best-selling novel by Edna Ferber. Following Giant, Warner Brothers gave Hopper a principle role in King’s Row, a drama for the studio’s ABC-TV series. Hopper played the part of Napoleon Bonaparte in The Story of Mankind. He also appeared in many television Westerns including Cheyenne, The Rifleman, and The Wagon Train, and in the films Gunfight at the OK Corral, with Burt Lancaster and Kirk Douglas, and The Young Land, playing a villain opposite Pat Wayne. In 1958, Warner Brothers loaned Hopper to 20th Century Fox for another Western, From Hell to Texas. A fatal clash of personalities between Hopper and the film’s director, Henry Hathaway, resulted in the loss of his Warner Brothers’ contract and Hopper’s expulsion from studio films for nearly seven years.

During the filming of The Sons of Katie Elder, Hopper began to conceptualize The Last Movie, which he wrote in collaboration with Steward Stern, writer of Rebel without a Cause. Struggling with financing, it became apparent that production of The Last Movie could not go forward, and Hopper took a small part in the psychedelic film The Trip, starring Peter Fonda, written by Jack Nicholson, and directed by Roger Corman, who gave Fonda and Hopper a chance to direct a scene in the film. The Trip earned a new audience among “anti-establishment viewers” and brought together the team that would later produce the 1969 breakthrough film Easy Rider.

In 1968, Bert Schneider and Bob Rafelson agreed to finance the “biker film” Easy Rider, named and co-written by Hopper, Terry Southern, and Peter Fonda. Filming began immediately with a 16mm camera. The actor selected to play the role of George Hanson was Jack Nicholson. Interest in the film grew gradually, and it was eventually included, as the official entry of the United States, at the Cannes Film Festival, where it received the award for Best New Director. The film went on to break box office records throughout the world and was nominated for Academy Awards in two categories—Best Screenplay (Fonda, Southern, and Hopper) and Best Supporting Actor (Nicholson).

The financial success of Easy Rider opened opportunities for young filmmakers. Universal Pictures hired five “young genius” directors, including Hopper, who, in 1970, revisited The Last Movie and began filming in Chinchero, Peru. During editing of The Last Movie, Lawrence Schiller and L. M. Kit Carson came to Taos to shoot a documentary film on Hopper, The American Dreamer, written by Schiller, Carson, and Hopper himself.

Though The Last Movie won the prestigious C.I.D.A.L.C. Award at the Venice Film Festival in 1971, the result was never announced, and Universal Pictures refused to distribute the film unless Hopper would agree to re-edit it. Hopper declined, and the film was effectively shelved. Although he had suspended his artistic activities outside of filmmaking, Hopper was represented in several exhibitions during the early 1970s.

During the 1970s, Hopper continued to collaborate with a number of significant artists. In 1971, Andy Warhol made a portrait of Dennis Hopper in The Last Movie. A year later, Warhol and Hopper worked together on MAO (1972), a silkscreen on paper produced by Warhol. Hopper also acted in many films throughout the 1970s, including Kid Blue by James Frawley, Tracks by Henry Jaglom, Mad Dog Morgan by Philippe Mora, and The American Friend by Wim Wenders. In 1976, Hopper flew to Pagsanjan, Philippines, for the Francis Ford Coppola film Apocalypse Now, an opportunity to work with Marlon Brando.

In 1980, Hopper was invited to play the role of an alcoholic father in the Canadian film The Case of Cindy Barnes, and later took over for Leonard Yakir, co-writer and original director of the film. Hopper rewrote the screenplay, renaming the film Out of the Blue after the song of his friend Neil Young. During the early 1980s, Hopper appeared in Rumble Fish, by Francis Ford Coppola; The Human Highway, by Neil Young and Dean Stockwell; The Osterman Weekend, by Sam Peckinpah; and O.C. and Stiggs, by Robert Altman. Hopper was also “rediscovered” as a photographer through two solo exhibitions in 1986, Dennis Hopper Photographs at Arts Lab in Birmingham, England, and Dennis Hopper: Out of the Sixties at Tony Shafrazi Gallery in New York. Hopper decided to leave Taos and moved to Venice, California, where he bought one of three studios built by Frank O. Gehry and Brian Murphy. Hopper’s choice of Venice was influenced by his fond memories of attending Beat poetry readings and Cool Jazz performances there with James Dean in 1954.

In 1987, Hopper starting filming Colors with Sean Penn and Robert Duvall. When the film was released the following year, screenings were cancelled at fifteen theaters in California and New Jersey for fear of potential gang violence.

Throughout the 1990s, Hopper found a niche as an accomplished character actor, appearing in such film and television productions as Flashback, Chattahoochee, Paris Trout, Red Rock West, Doublecrossed, True Romance, Speed, Search & Destroy, Waterworld, Carried Away, and Ed TV. In 2008, Hopper appeared in Sleepwalking, alongside Charlize Theron; Elegy, with Penelope Cruz and Ben Kingsley; Hell Ride, executive produced by Quentin Tarantino; and Palermo Shooting, directed by Wim Wenders. On March 26, 2010, Hopper was honored with the 2,403rd star on the Hollywood Walk of Fame. He passed away in Venice, California, on May 29, 2010, after battling prostate cancer. 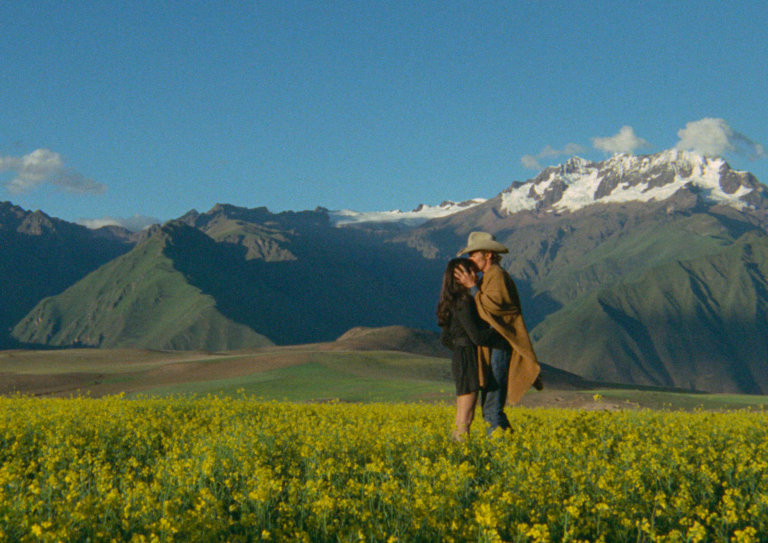 The Last Movie is something that I made in Peru. I won the Venice Film Festival with it, and Universal Pictures wouldn’t distribute it. You should think about Godard a little when you watch it. I made it because I’d read him say that movies should have a beginning,
a middle and an end - but not necessarily in that order. I was trying to use film like an Abstract Expressionist would use paint as paint. I’m constantly reminding you that we’re making a movie - I’m constantly making references to the fact that maybe you’re just being silly sitting in an audience, being sucked into a movie and starting to believe it - and then I jar you out of it. It’s not a very pleasant experience for most audiences.' (Dennis Hopper)